At sunrise, atop a mountain peak, a long, hauting howl spirals from the depths of a megaphone, and echoes arou the valley below. The sound clangs off trees and ridges like a pinball, and a clutch of wild ponies grazing among the craggy rocks stare at us, aghast. To be fair, it’s the first time they’ve seen a ‘wolf’ wearing a North Face jacket and there’s a good chance we’ve spoiled their lunch.

“We’ll play the recording three times, waiting two minutes between each to allow the sound to travel,” says our guide, Valeria Roselli, who with her wild dark hair, keen eyes and loping walk bears more than a passing resemblance to the creature we are tracking. 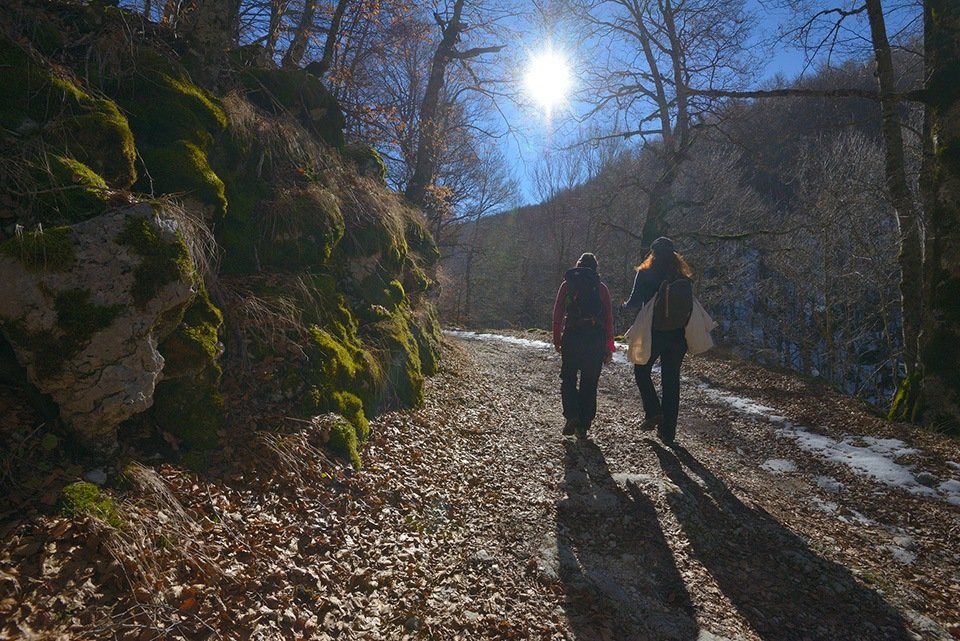 We’re in the heights of the Abruzzo National Park in central Italy, on a quest to find the noble Apennine wolf, just one of a growing number of increasingly popular wildlife adventures bringing visitors face to face with “real nature”. “People are looking for wild experiences much closer to home now,” says Simon Collier, who launched the European Safari Company in 2016. “We want to connect them with an authentic wilderness where the end result isn’t too polished. It’s immersive, a little rough around the edges.”

The company offers everything from bison tracking in the Southern Carpathians of Romania to white-tailed eagle spotting along the Polish-German border, and Collier believes Europe has just as much wildlife treasure to offer as safaris further afield in, say, Africa or India. “The landscapes there are so vast that you only get to experience the resort you’re staying in. A European safari can take you right into the middle of awesome nature, but you can also explore surrounding villages, local cuisine, traditions. 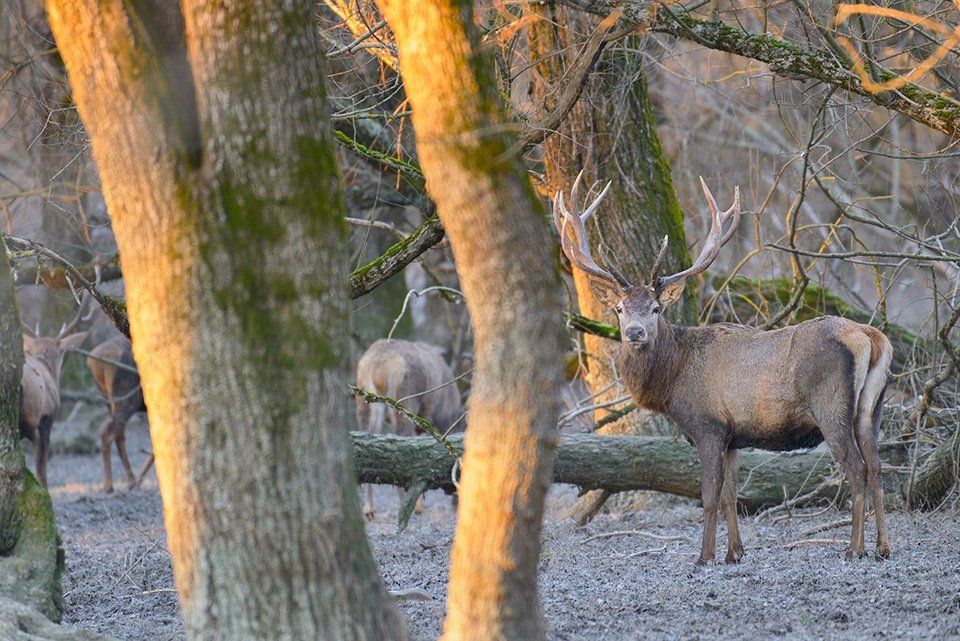 In the past 50 years, 37 mammal and bird species have been recovered in Europe, among them the Alpine ibex, with its outrageously extravagant horns, the taper-eared Iberian lynx and our favourite fairy-tale villain, the wolf. 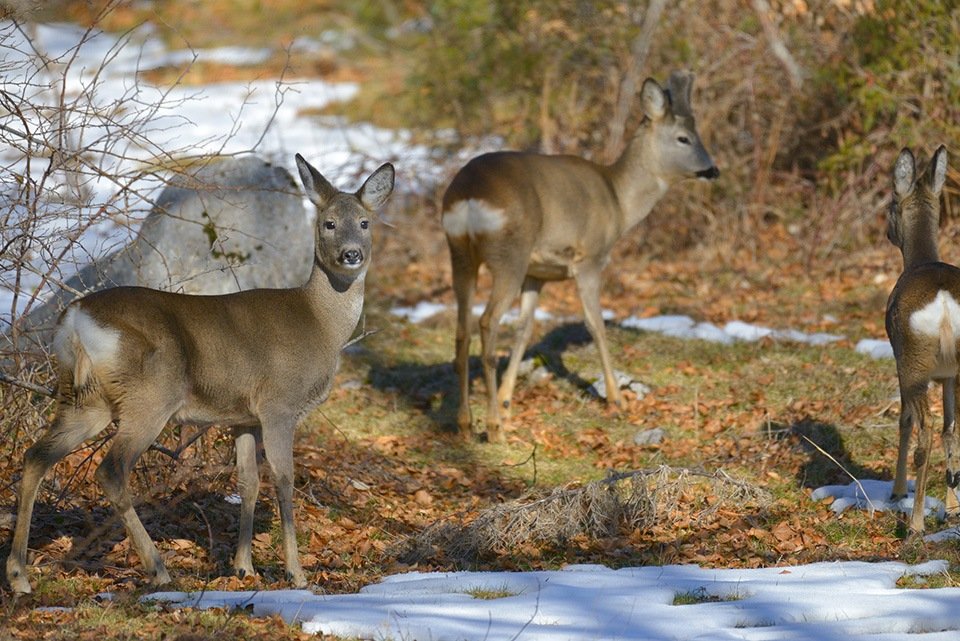 Back on the Abruzzo mountain top, our guide Roselli assures us that besides rattling the local equine community, the megaphone trick is one of the best ways to keep track of the number of packs in the area, usually eliciting a throaty howl back asserting their territory. Unfortunately, this time the wind is drowning out the sound, so there’s little in the way of conversation. Either that or they’re closing in silently; a cheery thought.

As we hike through astonishing landscape, past ice splintering on twinkling frozen puddles, wild strawberries and tiny yellow flowers dubbed ‘chandeliers of the king’ for their outlandish golden crowns, Roselli reminds us to keep our eyes and ears peeled. “Wolves are masters of camouflage,” she whispers. “Just because you can’t see them, doesn’t mean they’re not there.” Hairs prickling on the backs of our necks, we trudge on, spotting affirmative signs along the way. A piece of wolf scat (excrement) here, a horse skeleton licked clean as a whistle there. It’s like piecing together clues in a four-legged murder mystery. Put it this way: if I’m picked off at the back of the group, it’s unlikely to have been Colonel Mustard who did it.

Back to that scat… What at first seems like a pile of winter fur shed to make way for a dapper, new spring coat is actually the byproduct of a wild baor gourmet dinner. Roselli explains that the wolf’s stomach is designed to protect it from even the coarsest of hair, allowing them to feast on pretty much anything that takes their fancy. Should I be limbering up to run? 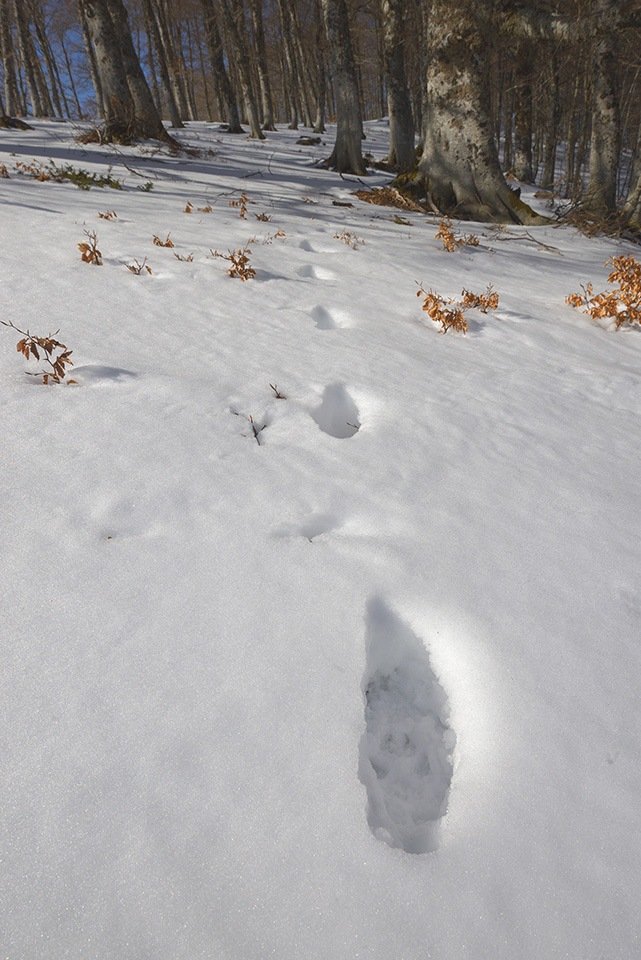 “Everyone wants to hear juicy details of near-death experiences,” says Collier. “Fortunately, we haven’t had any too-close-for-comfort moments, as having a healthy respect for nature usually means you don’t end up in those kind of positions.” We stop to check out a thermal camera hidden on a tree trunk and watch as the heat-sensitive imagery picks up a shadowy shape stalking through the brush.

Roselli reveals that wolves travel in single file, so that when the first picks up a scent, the others can fan out behind, boosting their chances of pinpointing the exact route their prey nas taken. Despite a run of promising leads, however, these wolves have gone to ground. “They sleep during the day up in the rocky parts of the mountain to stay warm, as the stones retain the sun’s heat,” shrugs Roselli. 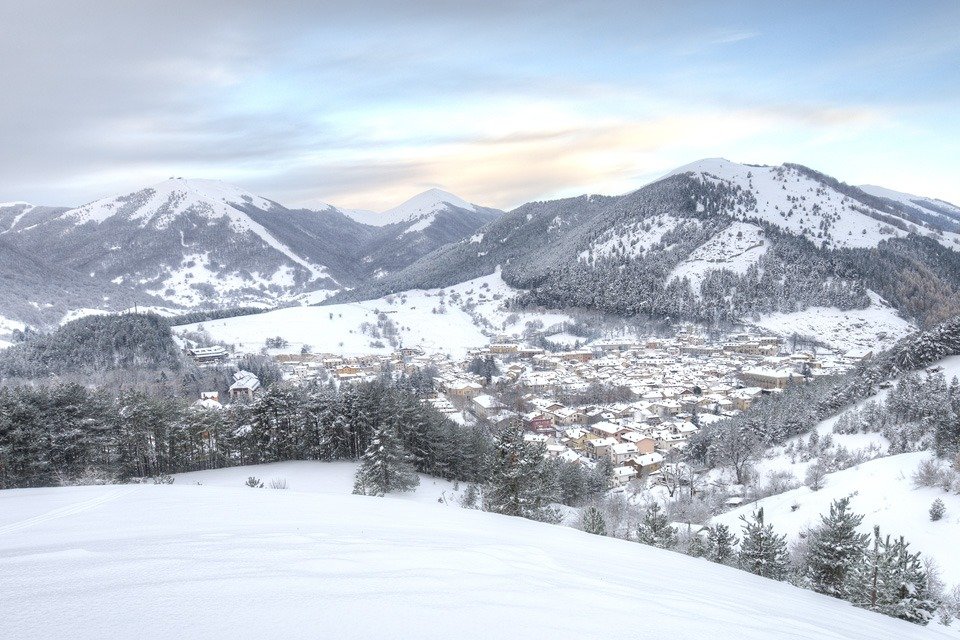 We take advantage of the lull to jump into a 4 x 4 for the bumpy drive down to the town of Pescasseroli, to discover more about this region’s tangled history with the wolf. The 2,000-strong population that live behind colourfully painted front doors are so entwined with this animal that even their domestic dogs are carbon copies of them.

The Czechoslovakian cross is a beguiling mix of Alsatian and European wolf, with arresting yellow eyes and rippling muscle twitching underneath a grey fur coat. We may not have seen the real deal yet, but this is surely as close as it comes. Strolling through the winding streets with one such fanged companion trotting at our heels, it’s shocking to learn that just 30 years ago, anti-wolf propaganda here was rife, with front pages of local newspapers depicting fictional wolves savaging children and Italian soldiers.

Government-funded solar-powered electric fences help local farmers to keep their sheep safe and risarcimento (compensation) offered for any woolly casualties is a bid to improve human-wolf relations. It’s working. “I’ve only lost one sheep this year, which is nothing compared to a decade ago, when I lost 10 in seven months,” says third-generation farmer Claudio Di Domenico. “Sure, the compensation claim is a bit of a headache, but I got the money within six months and they’re working to reduce that timeframe.” What about the predator who trotted away with his prize ewe? “I don’t feel badly towards the wolf. We share territory, after all, so it’s my responsibility to make sure I take the right precautions. They’re only doing what comes naturally. I dislike the red deer more, as they jump the fences and eat all my grass.”

It’s light years on from the ‘old way’, as Maria Saltarelli Pagnani, the beaming 70-year-old owner of Pescasseroli’s II Picchio restaurant confirms over a table groaning with crispy fried zucchini, mousse-light ricotta drizzled with honey and chunky loaves of freshly baked bread hiding a core of wild spinach and beans. “Now, if I see a wolf, it’s a beautiful experience, but I certainly didn’t always feel that way, back when I was out working the land with my husband on our farm.” 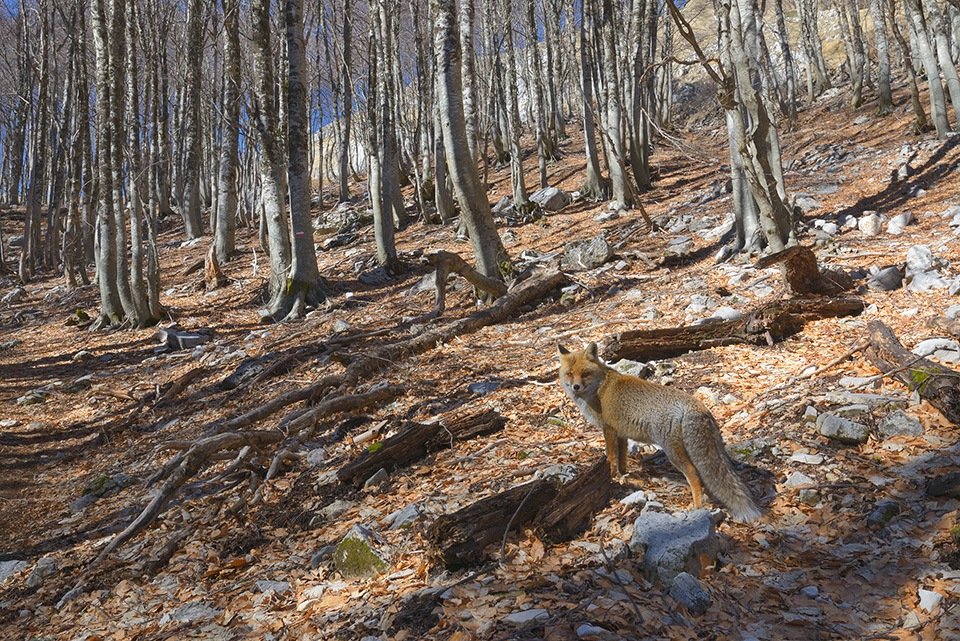 Later, at the cosy hotel Villino Quintiliani, we’re lamenting our lack of actual sightings over a glass of robust Montepulciano d’Abruzzo, when the owner bursts in to tell us that a wolf brazenly crossed his path just minutes earlier. He shows us the pictures on his mobile phone. “That’s the way it goes,” laughs Roselli. “Sometimes you spend all day searching, then one appears right when you least expect it.”

Fortunately, we don’t have long to wait for our own encounter. The next morning, we set off on snowshoes to a rustic shepherd’s but hideout, our last chance to lay eyes on the lupo. There’s complete silence, all sound muffled by a cushion of thick snow as we scan the terrain with binoculars. A red fox darts into a thicket of trees then, suddenly, a lone wolf appears out of nowhere, a lump of meat clamped between its jaws. It dumps it unceremoniously on the ground and, tearing at it with its paws, shreds it like brisket. The black/brown coat reveals it’s an adult – juveniles are grey – and its jauntily upright tail means ‘I’m king’, Roselli tells us.

After demolishing its spoils, its chest heaves with a contented sigh. “Every time you see one it’s a different experience, a different emotion,” she says. It’s a rare privilege to observe such an elusive animal on its home turf, especially one so deeply rooted in the local land and people. That night, there’s much to celebrate, so we set to work hand-rolling pasta and baking potatoes in the embers of the fire. Tucking into our candlelit feast, a chilling thought strikes me: what if they’re fattening us up to feed to their beloved wolves? Outside, a low, long howl pierces the black night and it doesn’t feel like such a farfetched idea. 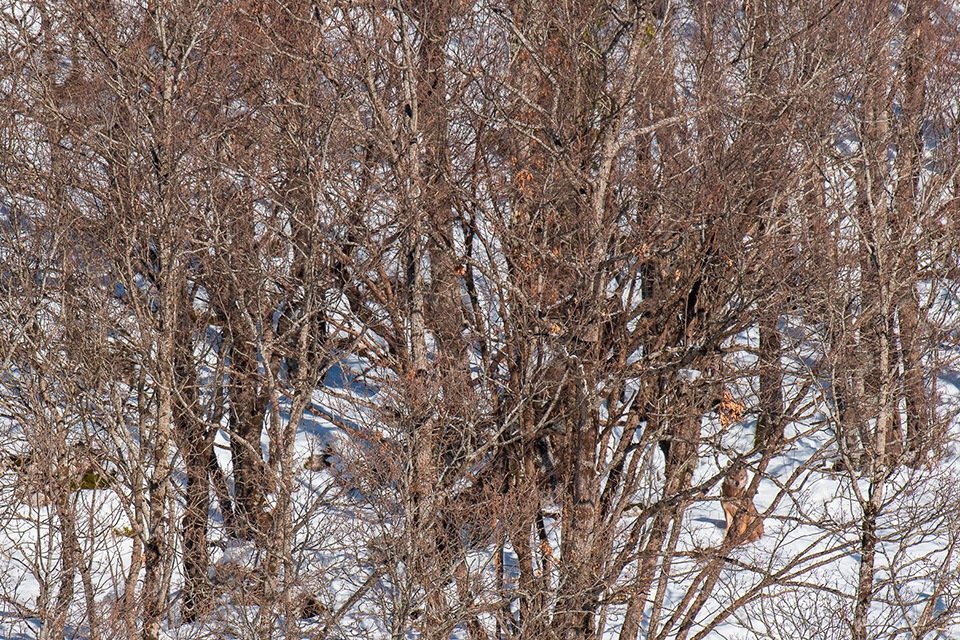 Extract from an article featured in EasyJet Inflight Magazine, by Sarah Neish
Download the pdf here